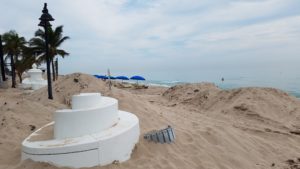 Early in the morning of February 9th, Congress passed HR 1892, legislation that set two year spending limits (“budget cap”), lifted the debt ceiling, and allowed for a short-term continuing resolution to fund the government for six weeks while a final FY18 budget can be drafted. It also included a Disaster Response bill to address the 2017 hurricanes and wildfires.  The budget cap and debt ceiling have ramifications for coastal spending because they impact the full economy, but the Disaster Response bill directly provides hundreds of millions of dollars for coastal restoration and resilience. ASBPA was pleased to see the bill included, at some level, all the funding for which we had been advocating.

The bill also appropriated $23.5 billion to FEMA’s “Disaster Relief Fund.” State and locals can use these funds to rebuild a wide variety of infrastructure damaged in federally declared disasters, including locally funded beach projects that are eligible for FEMA “Category G” funds. (See FEMA’s handbook for eligible uses of the Disaster Relief Fund.) Additional funding was provided for Community Development Block Grants and to federal highway system, both of which could be accessed for coastal resilience improvements for the right projects.

Coastal communities – particular those in the South Atlantic and Gulf Coast – will need to work with their local USACE districts and FEMA reps to determine exactly what projects can be funded and next steps. However, this is a massive infusion of federal funding for beach and coastal restoration and resilience that will need to be used wisely to prevent future storms from having the devastating impacts that 2017 hurricanes had.

An open letter to candidates about coastal infrastructure