ASBPA is pleased to be partnering with the American Shoreline Podcast Network to launch “The Capitol Beach,” a podcast that discusses federal beach and coastal policy with the people making that policy in Washington, DC. 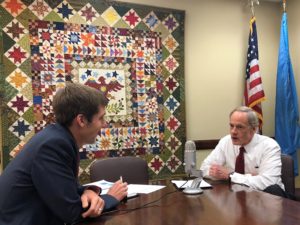 On this, the inaugural episode of the Capitol Beach podcast, host Derek Brockbank welcomes Senator Tom Carper to the show. Senator Carper, has represented Delaware in the U.S. Senate since 2001. A member of the Democratic Party, Carper served in the United States House of Representatives from 1983 to 1993 and was the 71st Governor of Delaware from 1993 to 2001. He currently is the Ranking Member of the Committee on Environment and Public Works.

ASBPA Executive Director, Derek Brockbank, will host this semi-regular podcast. Prior to starting with ASBPA, Derek worked as campaign director for a coalition effort to restore the Mississippi River Delta and Coastal Louisiana, and was part of a gulf-wide campaign to pass the RESTORE Act, securing billions of dollars for Gulf Coast restoration. This followed up on his work with National Wildlife Federation on climate adaption. Derek started his career as a grassroots organizer. Derek grew up in New York City and got his coastal education from an early age playing on the beaches of Long Island, and kayaking and fishing in Peconic Bay.

NYC Office of Resilience on the Capitol Beach

Why science matters to our coasts