The Capitol Beach has Highlights from USACE at ASBPA’s Summit

This episode of the Capitol Beach is an annotated “highlight reel” of presentations by the US Army Corps of Engineers at the recent National Coastal Summit hosted by American Shore and Beach Preservation Association (ASBPA). Most of the episode is Chief of Engineers, General Todd Semonite talking about how the Corps is changing to embrace Natural & Nature Based Features in construction and Engineering With Nature principles, as well as how he’s working to “revolutionize” Corps operations. We also hear from Amy Guise with Baltimore District, Jackie Keiser from Jacksonville District, and Scudder Mackey with Ohio DNR about regional coastal resilience studies in the North Atlantic, South Atlantic, and Great Lakes regions.

Finally, you’ll learn whether Ice Tsunamis are something Jon Snow has to deal with from the Night King or something Great Lakes coastal managers have to plan for during a normal winter (spoiler alert: the Midwest can get very cold!) 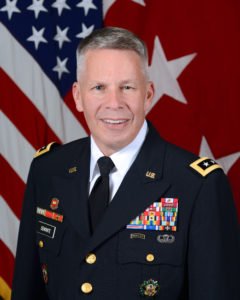 Ms. Amy Guise became the first female Chief, Planning Division, for the Baltimore District and in the North Atlantic Division, U.S. Army Corps of Engineers, in 2012.  She leads a team of interdisciplinary professionals addressing water resources issues and policies in the Potomac and Susquehanna River Basins, the Chesapeake Bay, and the Atlantic Coast of Maryland.  She is the Alternate Federal Commissioner to the Susquehanna River Basin Commission and the Interstate Commission on the Potomac River Basin. Partners and customers range from Department of Defense installations and other Federal agencies to states, non-governmental organizations and private entities.

Jacqueline Keiser, PG, PMP, is the Supplemental Program Manager for
the Jacksonville District overseeing the execution of over $3.5 billion in bipartisan budget act funds and also the Director of the Regional Center of Expertise for Regional Sediment Management. Jackie obtained her B.S. degree in Geology from Juniata College and her Master’s degree in Coastal Geology at the University of South Florida. Keiser has been with USACE for 20 years and worked in the Engineering Divisions of both the Jacksonville and Philadelphia Districts before moving to Coastal and Navigation Project Management in Jacksonville, where she has worked for the last 16 years.