NYC Office of Resilience on the Capitol Beach

Jainey Bavishi, the Director of New York City Mayor’s Office of Resilience, joins Derek Brockbank on the Capitol Beach. Recording from City Hall in New York City, rather than Washington DC, they discuss how the Big Apple is integrating resilience across city agencies, how resilience can be done equitably, and how Jainey’s experience in India and New Orleans guides her resilience ethos. They also discuss the controversial canceling of the Army Corps study on how to protect New York and New Jersey from coastal storms and sea level rise, and how New York City plans to protect its residents from climate impacts – turns out NYC is not planning to just get out “mops & buckets” to address sea level rise, as President Trump suggested in a tweet. 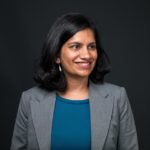 Jainey K. Bavishi currently serves as the Director of the NYC Mayor’s Office of Recovery and Resiliency and Deputy Chief Resilience Officer, where she leads the City’s OneNYC resiliency program, preparing the city for the impacts of climate change and other 21st century threats.

Jainey most recently served as the Associate Director for Climate Preparedness at the White House Council on Environmental Quality. In this role, she led the implementation of the climate preparedness pillar of the President’s Climate Action Plan. In the final year of the Obama Administration, she was responsible for embedding and institutionalizing climate resilience considerations across Federal programs and policies; advancing climate equity to address the disproportionate impacts of climate change on low-income and other vulnerable communities; and developing innovative approaches to climate adaptation finance.

The Capitol Beach has Highlights from USACE at ASBPA’s Summit