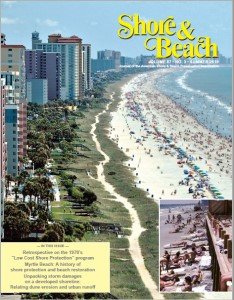 Hurricane Matthew (2016) caused significant beach and dune erosion from Cape Hatteras, North Carolina, USA, to Cape Canaveral, Florida, USA. At Myrtle Beach, South Carolina, the storm caused beach recession, and much of the southern half of the city’s beaches appeared to be overwashed in post-storm surveys. Around half of the city’s beaches appeared overwashed following the storm; however, the Storm Impact Scale (SIS; Sallenger 2000) applied to a pre-storm elevation model suggests less than 10% of the city’s beaches should have experienced overwash. Spatial analysis of elevation and land cover data reveals dunes that were “overwashed” during Matthew drain from watersheds that are >35% impervious, where those showing only dune recession are <5% impervious. The densely developed downtown of Myrtle Beach sits on a low seaward-sloping terrace. Additionally, indurated strata beneath the downtown area can prevent groundwater from draining during excessive rain events. As a result, the most continuous impervious surface cover and near-surface strata lie within a half-kilometer of the beach and drain directly to the backshore. Along the U.S. Southeast coast, this is somewhat rare; many coastal systems feature a lagoon or low-lying bottomland along their landward border, which facilitates drainage of upland impervious surfaces following storm passage. At Myrtle Beach, all of the stormwater runoff is drained directly to the beach through a series of outfall pipes. Many of the outfall pipes are located along the backshore, near the elevation of storm surge during Matthew. Runoff from Matthew’s heavy rains was observed causing ponding on the landward side of the foredune and scouring around beach access walkways. Based on these observations, the severe dune erosion experienced near downtown Myrtle Beach during Hurricane Matthew may have been caused by runoff and/or groundwater flux rather than overwash. These results highlight an unexpected relationship between upland conditions and dune erosion on a developed shoreline. That is, dune erosion can be caused by mechanisms beside overwash during storm events.