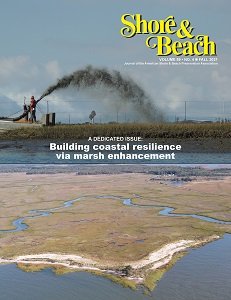 Tidal marsh loss at Blackwater National Wildlife Refuge (NWR) has been a major concern of refuge managers in recent decades. The approximately 2,035 hectares (5,028 acres) of tidal marsh that have converted to open water in Blackwater NWR since 1938 (Scott et al. 2009) represent one of the most significant areas of marsh conversion within the Chesapeake Bay. In 2013, a suite of climate adaptation strategies focused on sea level rise was developed for Blackwater NWR and surrounding areas of Dorchester County by the Blackwater Climate Adaptation Project (BCAP). The BCAP is a collaboration of The Conservation Fund, Audubon Maryland-DC, and the U.S. Fish and Wildlife Service, assisted by the Maryland Department of Natural Resources (MD DNR), U.S. Geological Survey, and others. In 2016, the BCAP implemented a thin-layer placement (TLP) project at Shorter’s Wharf in Blackwater NWR on 16 hectares (40 acres) of subsiding and fragmenting tidal marsh dominated by Schoenoplectus americanus, Spartina alterniflora, and Spartina patens. The purpose of the project was to increase the 16 hectares’ (40 acres’) resiliency to climate-driven sea level rise and storm impacts. The project built up the marsh elevation by applying thin layers of sediment dredged from the adjacent Blackwater River. The sediment enhancement was designed to extend the longevity of the marsh and increase its resiliency by raising its surface elevation in relation to the tidal regime and to return the habitat to its prior high-marsh condition with S. patens dominating. The colonization of this site by saltmarsh sparrow would be an indicator of success in reaching this goal. Dredging operations in November and December 2016 placed approximately 19,900 cubic meters (26,000 cubic yards) of sediment on the project site. Post-restoration elevations obtained one year after material placement indicated that, although the target elevations were achieved in 78% of the surveyed placement area, the material was not distributed uniformly. Coarser material tended to stack up at the discharge location while the grain size declined and the slopes flattened toward the periphery of the discharge area. In 2017, natural vegetation had regenerated through the placed sediment with vigorous regrowth of S. americanus and S. alterniflora . This regrowth was supplemented with hand-planting of more than 200,000 plugs of S. patens. Vegetation monitoring is ongoing to determine the plant composition evolution within the placement site. Pre-dredge and post-dredge bathymetric surveys reveal 70% accretion nearly two years after dredging within the borrow area footprint.