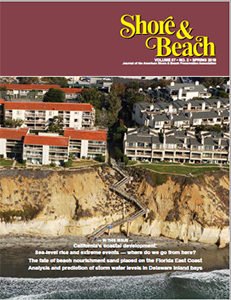 From the editor’s desk:

Sea level rise by the numbers

Over 100 million yd3 of sand have been placed on Florida east coast beaches since the start of widespread beach nourishment in 1970. What has been the fate of this sand? Has it largely disappeared as some suggest, or is it largely in place, having increased beach width as much as expected? Shoreline position measurements show that beach nourishment has dominated shoreline change with beaches widening over 80 ft on average since 1970. Nourished beaches have widened an average of almost 120 ft and adjacent beaches that have never been nourished have widened almost 50 ft due to longshore transport moving nourishment sand to them. Using equilibrium profile theory, shoreline advance due to beach nourishment minus shoreline recession caused by longshore transport, inlets that trap sand in shoals, and sea level rise is shown to equal measured shoreline change within uncertainty limits in each east coast Florida county and for the entire coastline. About 90% of beach nourishment sand remains on profiles in the active littoral zone. Shoreline advance produced by beach nourishment has been eight times greater than the magnitude of the recession caused by sea level rise from 1970-2017. If beach nourishment sand is placed along this coast at the rate of the past 40 years, the shoreline will be wider in 2100 than in 2018 for all sea-levelrise scenarios of the Intergovernmental Panel on Climate Change (IPCC). Increased beach width since 1970 has produced significant benefits by reducing infrastructure storm damage and greatly increasing beach tourism.

As sea level continues to rise at an accelerated rate, California’s intensive coastal development and infrastructure is coming under an increasing threat. Whether lowelevation shoreline areas that are subject to flooding at extreme tides and times of storm wave run-up, or construction on eroding bluffs or cliffs, the risks will continue to increase from extreme events but, over the longer term, from continuing sea-level rise. Future sea-level rise values under different greenhouse gas scenarios have recently been projected and adopted by the state to be used in coastal land use planning and decision making. While beach nourishment can provide very short-term protection, and seawalls and revetments can provide somewhat longer-term protection, they both come with significant costs and also environmental impacts. The era of routine armor emplacement is coming to an end in California, and whether designated as relocation or managed retreat, now is the time to make the difficult decisions on how this will be accomplished and what the trigger points will be to initiate the response.

A simple approach based on an analytical model and available tide gauge data is proposed for the analysis of storm tide damping inside inland bays with complex bathymetry and for the prediction of peak water levels at gauge locations during storms. The approach was applied to eight tide gauges in the vicinity of inland bays in Delaware. Peak water levels at the gauge locations were analyzed for 34 storms during 2005-2017. A damping parameter in the analytical model was calibrated for each bay gauge. The calibrated model predicted the peak water levels within errors of about 0.2 m except for Hurricane Sandy in 2012. The analytical model including wave overtopping was used to estimate the peak wave overtopping rate over the barrier beach from the measured peak water level in the adjacent bay.

Despite the importance of coastal dunes to many low-lying coastal communities and ecosystems, our understanding of how both climatic and anthropogenic pressures affect foredune evolution on time scales of years to decades is relatively poor. However, recently developed coupled numerical modeling tools have allowed for the exploration of the erosion and growth of coastal foredunes on time scales of hours to years. For example, Windsurf is a new process-based numerical modeling system (Cohn et al. 2019a) that simulates the evolution of dune-backed sandy coastal systems in response to wave, wind, and water level forcings. CReST, developed as a front-end interface to Windsurf, aims to add the ability to incorporate beach nourishment and dune construction, beach and dune grading, dune grass planting scenarios, dune grass removal, and the presence of hard engineering structures into the model framework to better account for the complex dynamics of managed coastlines. Initial model sensitivity tests suggest that the model provides a flexible framework to investigate the complex interactions between beaches and dunes for a variety of exploratory and applied applications.

Less than two weeks after Hurricane Florence made landfall in North Carolina (NC), a team of researchers from NC State University traveled to Dare County to investigate the storm’s effects on beaches and dunes. Using available post-storm imagery and prior knowledge of vulnerabilities in the system, the team identified several locations to visit in the towns of Kitty Hawk, Nags Head, Rodanthe, Buxton, and Hatteras, as well as a number of locations within the Pea Island National Wildlife Refuge (Figure 1). Data collected included topographic profiles, still imagery and video from unmanned aerial systems, sediment samples, and geo-located photography. This Coastal Observations piece presents some of the data and photos collected; the full report is available online (Sciaudone et al. 2019), and data collected will be made available to interested researchers upon request.

During Sea Grant’s Mid-Atlantic Regional Meeting at the end of March 2018, a group of coastal scientists took advantage of the location on the Outer Banks of North Carolina to view the recent impacts of multiple nor’easters that had wreaked havoc on the coast (Figure 1). “Nor’easters” is the term used for the extratropical cyclones that form during the months between October and April, typically, when cold, dry continental air meets warmer air from the Atlantic Ocean. These storms intensify as they move northeast along the coast, bringing large storm surges and increased wave energy resulting in flooding and beach erosion. Coastal resiliency and flood insurance rates are critical issues to local communities. The Community Rating System, FEMA flood maps, and the Biggert-Waters Flood Insurance Reform Act of 2012 all play a part in determining the flood insurance rates for homeowners in North Carolina.

By recognizing the interconnected nature of our coastal and riparian systems — the physical, economic, and social systems — we can make progress toward creating and implementing better approaches to realize communities that are vibrant and increasingly resilient to higher sea levels and storm surges, inland flooding, erosion, and myriad other climate-related changes.