Guest editorial: Introduction to the dedicated issue on the 2017 & 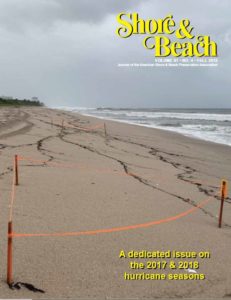 Remote sensing data collected in the aftermath of a disaster can play a vital role in identifying badly damaged areas where homes and infrastructure have been destroyed, prioritizing emergency assistance needs, locating survivors, and providing restoration guidance. In this study, we use NOAA’s National Geodetic Survey Emergency Response Imagery database, LIDAR, and tax appraiser data to assess storm damage after Hurricane Michael in Mexico Beach, FL. Post-Michael imagery was classified as debris, roofs, vegetation (trees and grass), sand, roads, and water. Pre-storm LiDAR-derived building footprints in the impacted area were overlaid on the reclassified post-storm imagery to quantify the extent of structural damage to residential areas. The extent of the damage was also examined using maximum wave height and depth of storm surge inundation derived from the output of the ADCIRC modeling system. Over 700 buildings were classified as considerably damaged or completely destroyed. The 2017 tax appraiser data were used to estimate the economic value of the storm impact. Results of this study may help in reconsidering existing building code requirements to protect people and property and reduce future storm damages.

Storm surge and waves from Hurricane Nate in 2017 resulted in large overwash and inundation regions on Dauphin Island, Alabama. The overwash event consisted of the transport of water and sediment over the beach, dune, and barrier island system. Seven transects were established to measure pre- and post-storm survey profiles. Nine wave and water level sensors were deployed in an overwash region and captured the overwash conditions including time-varying water levels and waves. All transects experienced a net loss of sediment from the subaerial region surveyed and a range of inundation and sediment overwash. The results highlight the limits of empirical estimates for evaluating the exposure of backdune regions to overwash and inundation.

In situ hydrodynamic and morphodynamic measurements during extreme storm events

Wave forcing from hurricanes, nor’easters, and energetic storms can cause erosion of the berm and beach face resulting in increased vulnerability of dunes and coastal infrastructure. LIDAR or other surveying techniques have quantified post-event morphology, but there is a lack of in situ hydrodynamic and morphodynamic measurements during extreme storm events. Two field studies were conducted in March 2018 and April 2019 at Bethany Beach, Delaware, where in situ hydrodynamic and morphodynamic measurements were made during a nor’easter (Nor’easter Riley) and an energetic storm (Easter Eve Storm). An array of sensors to measure water velocity, water depth, water elevation and bed elevation were mounted to scaffold pipes and deployed in a single cross-shore transect. Water velocity was measured using an electro-magnetic current meter while water and bed elevations were measured using an acoustic distance meter along with an algorithm to differentiate between the water and bed during swash processes. GPS profiles of the beach face were measured during every day-time low tide throughout the storm events. Both accretion and erosion were measured at different cross-shore positions and at different times during the storm events. Morphodynamic change along the back-beach was found to be related to berm erosion, suggesting an important morphologic feedback mechanism. Accumulated wave energy and wave energy flux per unit area between Nor’easter Riley and a recent mid-Atlantic hurricane (Hurricane Dorian) were calculated and compared.

Hurricane Michael made landfall as a Category 5 Hurricane on 10 October 2018 between Mexico Beach, Florida and Tyndall Air Force Base in Panama City Beach, Florida causing damages totaling $25 billion (Beven et al. 2019). While damages were caused by both wind and surge, this paper is solely concerned with the surge induced damages which were observed predominantly within 50 km (27 nmi) of the hurricane’s path. Generally, regions to the east of Hurricane Michael’s landfall sustained the most severe damages and appear consistent with the spatial gradient in peak water levels. This gradient was marked; with surge induced damage concentrated in the immediate vicinity of Mexico Beach and attenuating significantly over distances as little as 37 km (20 nmi) to the west in Panama City Beach and east in Port Saint Joe (Kennedy, in review). The gradient in erosion was also pronounced, with Panama City Beach experiencing an average erosion rate of 0.4 m3/m (3.9 cy/ft) while Mexico Beach and Cape San Blas experienced rates approximately three (1.1 m3/m or 11.5 cy/ft) and five (1.7 m3/m or 18.5 cy/ft) times that. For inherent reasons, the pronounced gradient in surge damages and erosion values are of primary interest to coastal researchers and managers. Storm Erosion Index (SEI), developed by Miller and Livermont (2008) combines the three primary drivers of coastal erosion (wave height, total water level, and storm duration) into a physically meaningful form to evaluate storms based on their erosion potential. Here, SEI is applied to explore these spatial variations at seven distinct regions within the Florida Panhandle and are compared to the observed impacts for both erosion and structural damages. These regions include: (west to east) Panama City Beach, Tyndall Air Force Base (AFB), Mexico Beach, Cape San Blas, Port St. Joe, St. Vincent Island, and St. George Island. Empirically, the cumulative SEI relates well with the observed beach erosion; while the Peak Erosion Intensity (PEI) was found to better capture the trends in structural damages. By capturing the spatial variation of the storm intensity, SEI and PEI are therefore proposed as a viable engineering demand parameter with potential applications in community scale fragility curves.

Restoring natural infrastructure offers much promise as a means to reduce both flood hazard and exposure to complement and supplement other flood damage reduction strategies. Interest increased in flood risk reduction methods using natural and naturebased features, in part, because of increased recognition that such could provide both flood risk reduction and other benefits, such as water quality uplift, community recreational space, and fish and wildlife habitat. Recent flood disasters and the rising costs of disaster response and recovery have triggered policy shifts toward economically efficient investments that enhance greater community resilience. While natural infrastructure is becoming more widely recognized as a tactic for building community and ecological resilience to erosion and flooding, it remains underutilized. Actions to aid consideration of natural infrastructure and scale up its use are presented.